Communicating Across the Cosmos — part 3

This is Part 3 of our report from the Communicating Across the Cosmos workshop on interstellar message composition held at the SETI Institute in Mountain View, California, November 10–11th, 2014. You can read Part 1 here and Part 2 here.

In my previous posts I introduced the context of historical and modern activities centred around communication with extraterrestrial intelligence (CETI). I also outlined some of the most interesting problems discussed in the field of CETI today.

In this post I will focus on my own research into the limits of communication in CETI. It is based primarily on the Lingua Extraterrestris dissertation I wrote for my masters degree at Central Saint Martins College of Art and Design in 2011, but since then I have taken the research with me to several events and venues, and discussed it on the wider CETI forum.

Our human endeavour to communicate with another mind starts on Earth. According to various estimates, there are between 5,000 and 7,000 languages spoken on our planet. This multitude and variety of languages has always been a great challenge for humankind, but it has also inspired people to find ways of bridging this gap in communication. In 1887 a Polish-Jewish ophthalmologist, Ludwik Zamenhof, published Esperanto — a constructed language designed to help local Polish-, Yiddish-, Lithuanian-, Belarusian-, Russian- and German-speaking communities in his city of Białystok to communicate. 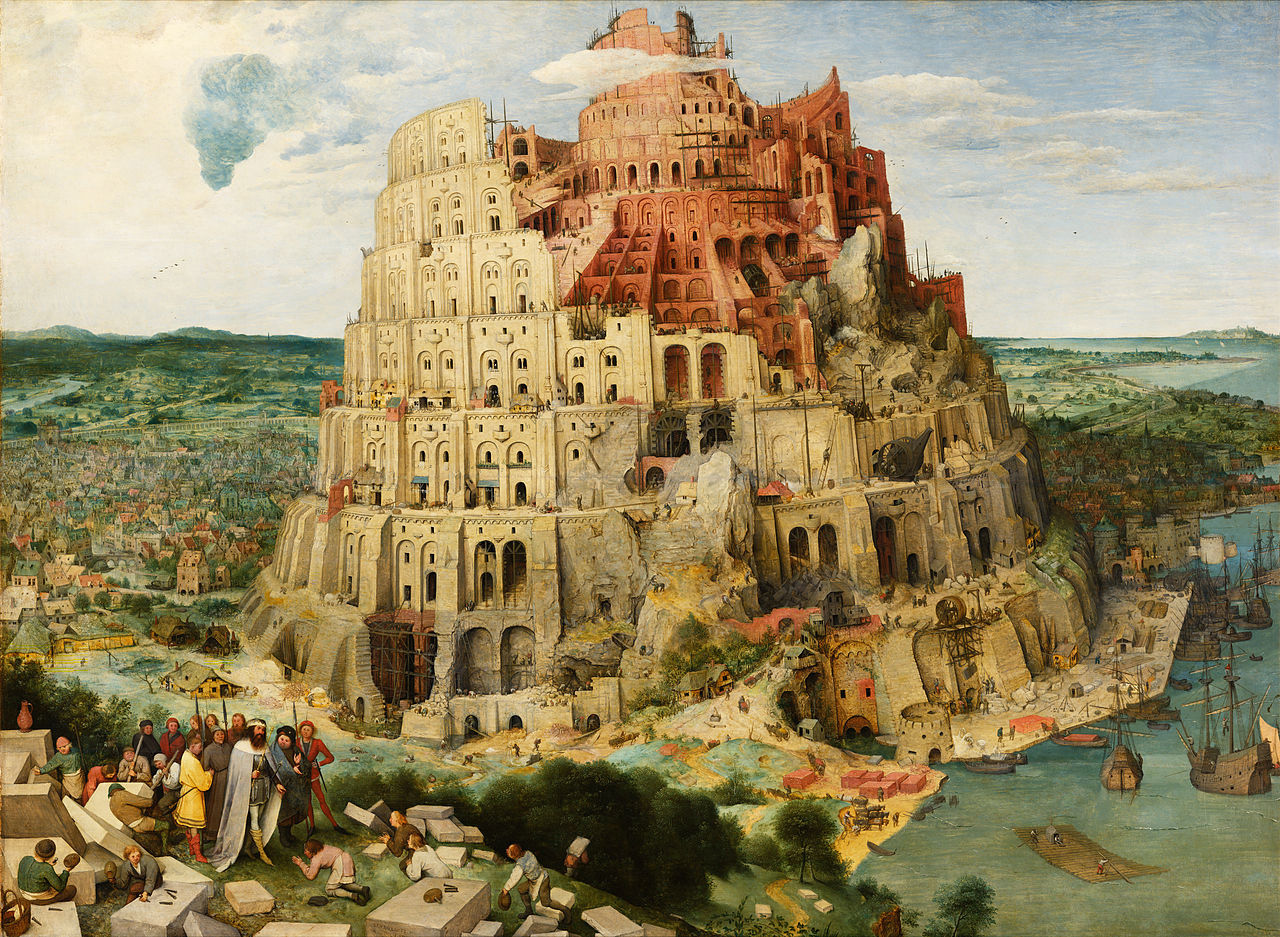 The Tower of Babel by Pieter Bruegel the Elder, Kunsthistorisches Museum, Vienna

Since the end of 19th Century our understanding of communication has evolved and expanded. For me personally — that is from the perspective of a communication designer — the most interesting question that remains to be answered is about the limits of communication. In Lingua Extraterrestris, as an effort to find out more about these limits, I investigate historical and fictional examples of CETI. On the historical side, I look into the documented acts of sending interstellar messages (Pioneer plaque, Voyager record, Arecibo message) and receiving alleged extraterrestrial signals (Little Green Men 1 or the Wow! Signal), as well as into the development of artificial mathematical languages for CETI use (Lincos). On the fictional side, I analyse stories of encounters with alien civilisations from science-fiction novels by Stanisław Lem (Solaris, His Master’s Voice and Fiasco), from science-fiction films by Steven Spielberg (Close Encounters of the Third Kind) and Paul Verhoeven (Starship Troopers), and from reports on extraterrestrial activity on Earth (first UFO sightings by George Adamski and accounts from independent thinkers documented by Sir Patrick Moore).

In search for a framework that would support and guide the analysis of historical and fictional examples of CETI, I refer to two well established general models of communication. The Roman Jakobson model is used to analyse spoken communication. Among six parameters that Jakobson identifies to characterise any possible human conversations, there are three that apply very well to CETI: contact, context and code.

The second model is the Shannon-Weaver model of communication which has been dubbed ‘the mother of all models’, because it characterises the process of signal transmission in a very universal way. In his model, Claude Shannon included one parameter without which discussing CETI would not be possible: channel. These four parameters sourced from two prevalent models of communication — channel, contact, context and code — serve as useful lenses, through which I explore CETI examples in Lingua Extraterrestris.

Shannon defines channel as ‘merely the medium used to transmit the signal from transmitter to receiver.’ There are many examples of the channel. It can be the 1420 Megahertz radio frequency selected for project Ozma. It can be the physical shape of the metal Pioneer plaque. It can also be the vibration of air carrying sounds from vocal cords to ears.

In his novel Solaris Stanisław Lem tells the story of the impossibility of finding a single channel for communication. The plot follows human scientist based on planet Solaris. Solaris is entirely covered by the Ocean — a single, planet-sized organism which is sentient and intelligent. Human scientists make numerous attempts to communicate with Solaris using a range of channels: visual observation, nuclear explosions, X-rays. Everything fails. No communication can be established. At the same time the Ocean exercises its own channel which is completely unfamiliar to human scientists. It is some kind of a mental channel through which the Ocean probes human minds and accesses their deepest memories. Later, those memories are manifested in the form of Visitors — projections of people with whom scientists had tragic personal relationships. None of the channels used by scientists or the Ocean facilitates communication. Instead, we see a sequence of actions and reactions, experiment and failures, with each party being probed by another through various physical or mental media. The Ocean is so dramatically different from humans, that any communication, any meaningful exchange of signals, finding a single common channel for sensible interaction is beyond our reach. Finding one common channel to establish communication is impossible on Solaris. 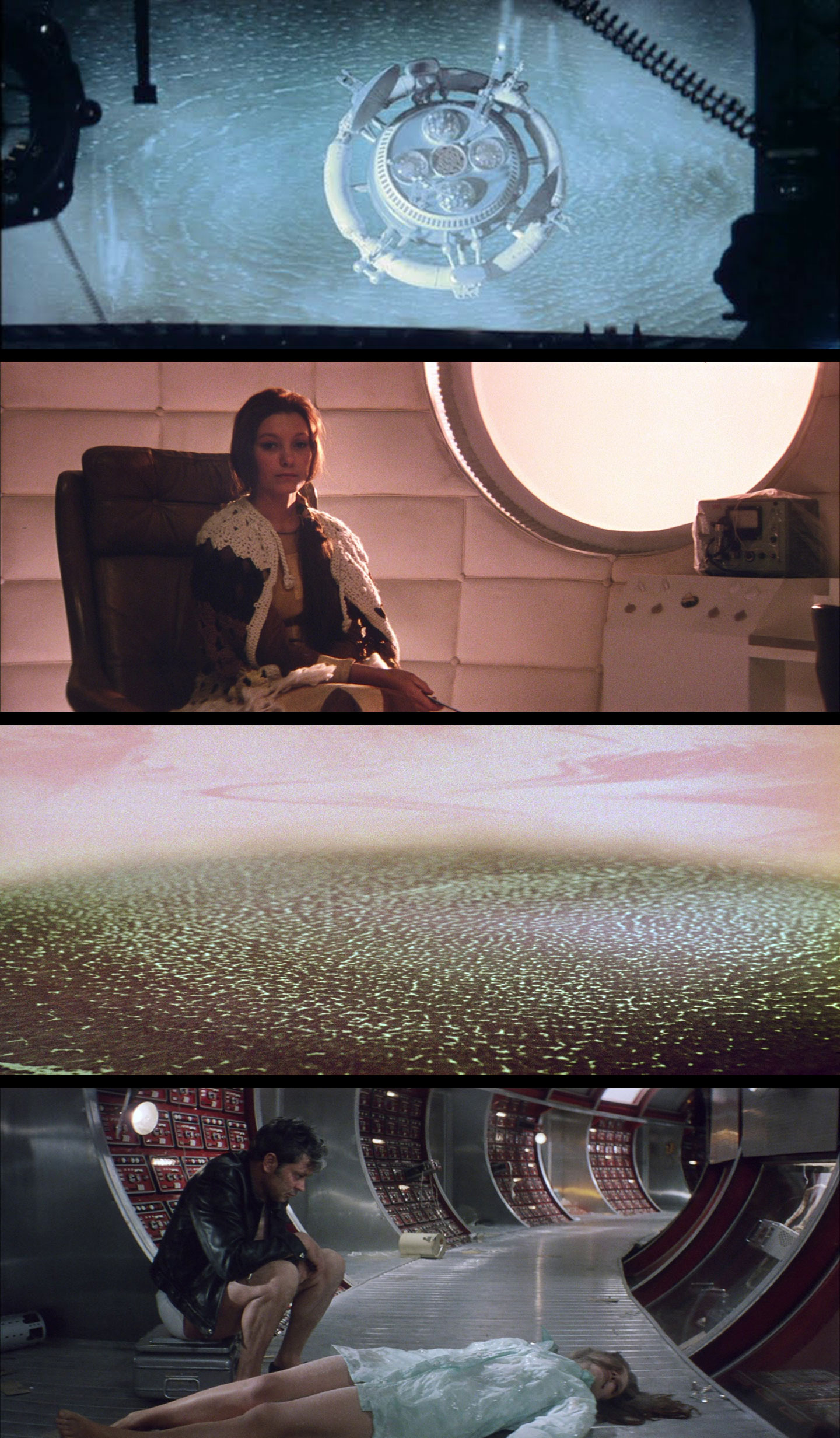 Once a channel for communication can be found, contact can be established. Jakobson defines contact as a function of language used ‘to establish, to prolong, or to discontinue communication’. When the phone rings, it tells us that there is someone on the other end of the line. We pick up, because we know that they have something to tell us. Any signal emission can become transmission, once we get a confirmation that someone is receiving it.

Contact is a key phase in the communication process when both parties share the awareness of being connected. In Close Encounters of the Third Kind Steven Spielberg tells the story of an extra terrestrial intelligence (ETI) making contact with humanity in a progression of steps and through a range of channels. First the ETIs announce themselves to terrestrial authorities by returning lost equipment and leaving it in impossible locations. They return a missing squadron of World War II bombers and leave SS Cotopaxi in the middle of the Gobi Desert. These strange events alert the scientific community. The contact is aimed at winning their attention. ETIs also contact a number of individuals. Roy and Jillian both witness a UFO which exposes them to very bright, burning light. That light impregnates them with a mental image of a shape. Soon they start seeing that familiar shape in everyday objects. They become obsessive about it and try to find out what it means. Later, we learn that the shape is personalised invitation to a rendezvous with the ETIs. The ETIs also address whole communities. Pilgrims in Dharamsala, India receive a 5-tone musical phrase played by a UFO. In this way ETI probes the channel to see if there is someone to on the other end. There is. The 5-tone phrase is broadcast back into space and in response ETIs send a signal containing 6 digits. These are coordinates of a rendezvous place. Throughout the film we follow this elaborate and well curated plan to win attention, establish contact and to set up a rendezvous place near the Devil’s Tower in Wyoming where the grand finale takes place. 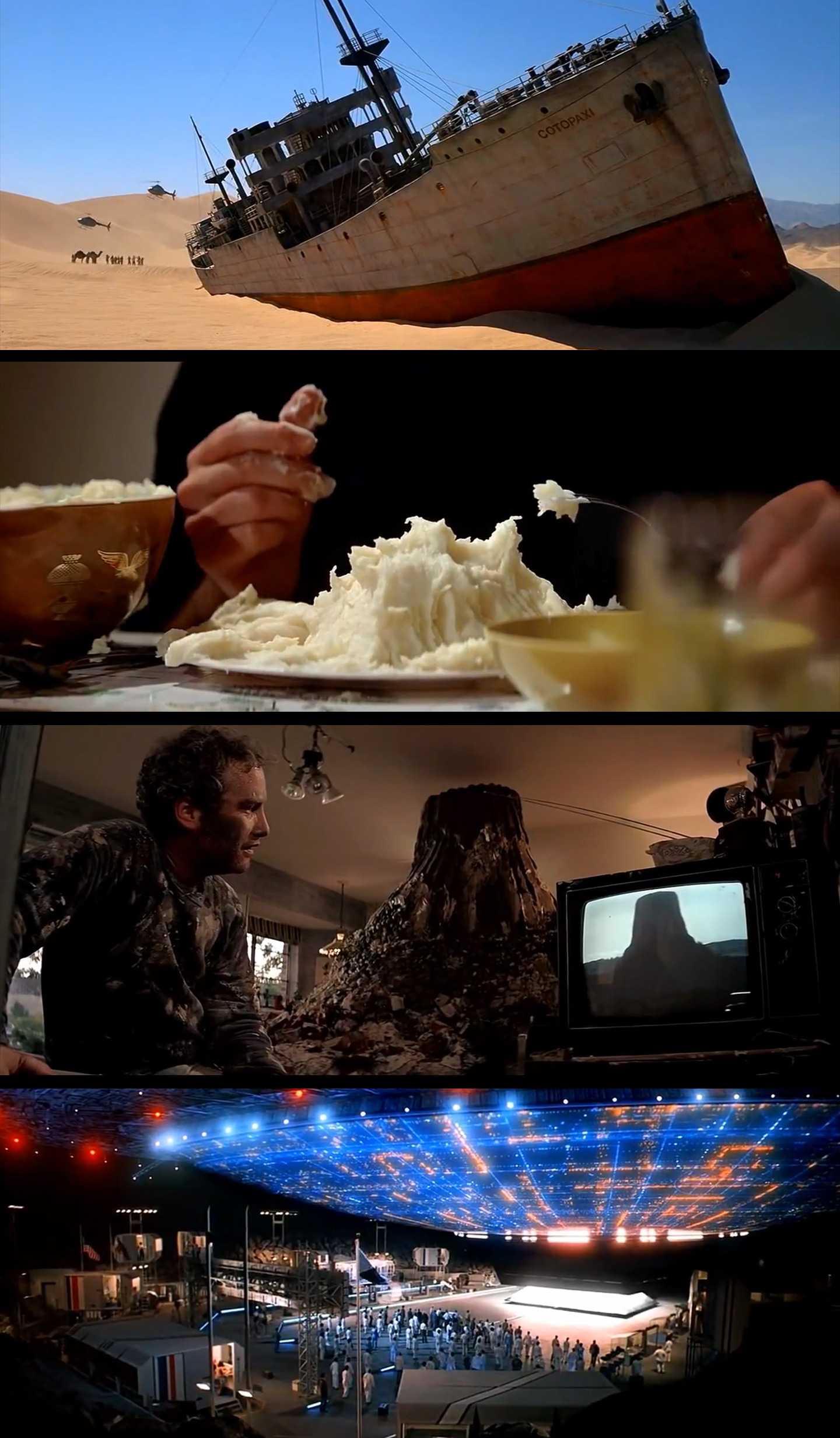 Context is not as clear-cut as other lenses. In the context of CETI it can be defined as: the ability to relate to the other mind, to understand the reasons and standpoint from which they communicate. Imagine we tell an ETI that, due to the length of time between us sending a message and them responding to it, their messages will be received not by us but by our descendants. In this communication, we would have made the assumption that, like us, the ETIs are also mortal and have a shared contextual understanding of life, death and reproduction. But what if the ETIs are eternal or immortal? They will not understand the concept death or passing of generations. Referring to our descendants will simply make no sense to them unless, of course, that they understand our context…

In science-fiction aliens are often depicted with a strong terrestrial bias. Their context is made similar to ours, which helps both races to communicate. That’s why Klaatu in The Day The Earth Stood Still appears as an English gentleman. In Starship Troopers directed by Paul Verhoeven and based on Robert A. Heinlein’s novel, aliens also look somehow familiar. But this does not help our communication. We see a story of an interplanetary war between two species: Humans and the Bugs. In CETI discourse, context can be linked with the problem of the environment, in which life forms emerge and evolve, adapting to specific conditions. In Starship Troopers we see Bugs shaped by the same environment in which we have evolved: medium-sized rocky planets, same gravitational forces, same air to breathe, same meat to eat. Even our anatomy and physiology are similar. But there is even more… Both species are curious to learn about another race. However, they only do this to find and exploit another’s weakness in the military conflict. Both societies are brutal, militant and with a strong hierarchical organisation. Many shots show superficially chaotic, swarm-like behaviour of human and bug soldiers. Finally, they both exhibit a strong need to expand and colonise other planets. Humans and bugs share a similar environment and context. In other science-fiction stories this would normally help civilisations to communicate. But here they also share the same goal: to exterminate and colonise the other. In Starship Troopers sharing of the context is the underlying reason for a brutal, escalating conflict. 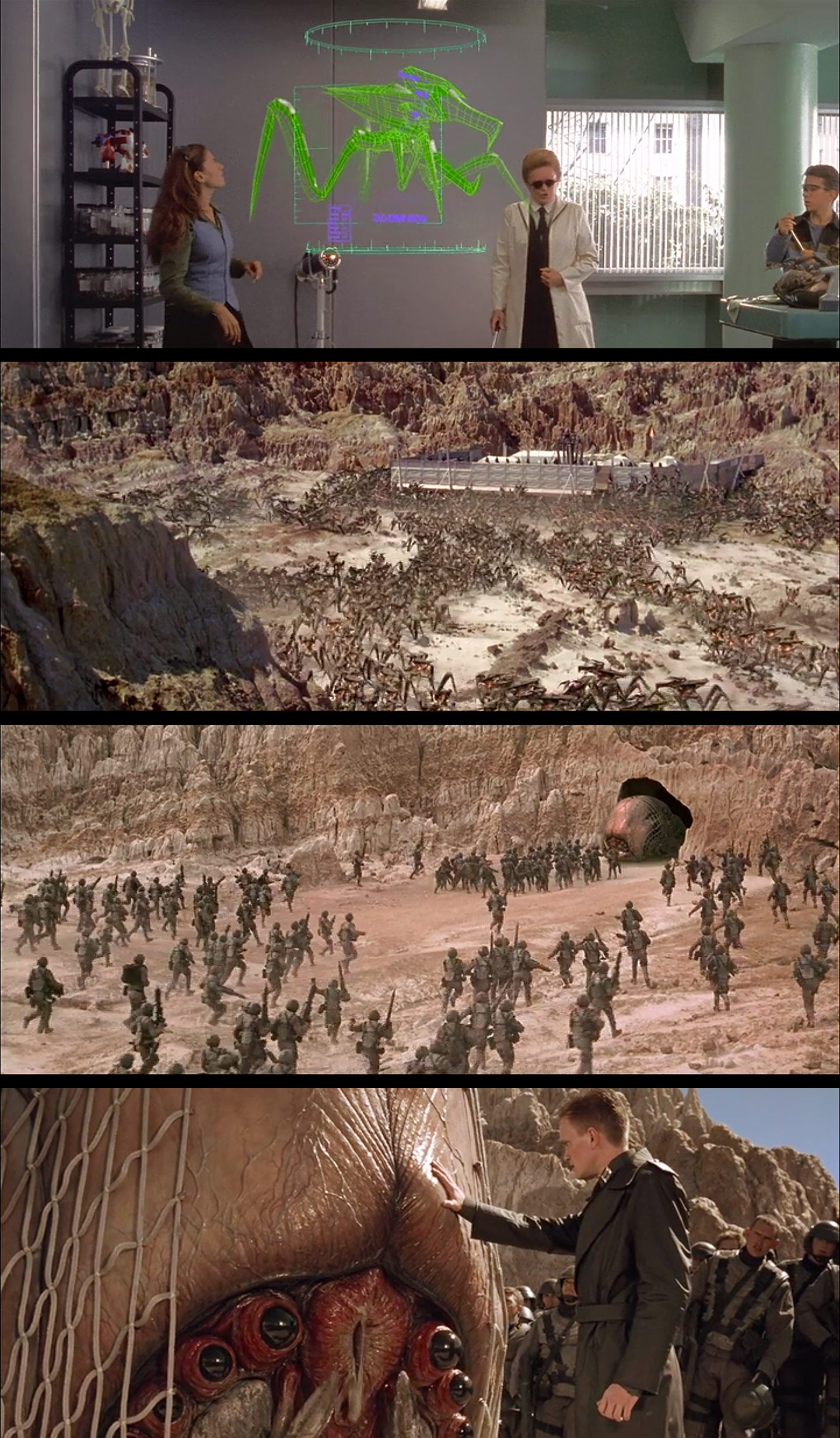 Code it the final lens that we use to inspect CETI. It relates to the compatibility of languages. If code is shared, signals can be decoded and read on both sides of the wire. In our daily experience codes are languages used in different countries of the world. The Morse code is an artificial code invented for the purposes of early telecommunications. Codes can also be more subtle and deeply ingrained in human cultures. In the CETI debate, the argument is that we should either send a message with a key, or use codes based on universal systems, such as basic mathematics. However, science-fiction knows other codes…

In Stanisław Lem’s His Master’s Voice we read a story of decoding of a cosmic message intercepted from space. The novel is a personal memoir of a mathematician, professor Hogarth, who describes four types of codes:

There are no clear-cut distinctions between these four types. For example an ovum is both a production protocol, as well as a description of itself and of the organism it will grow into. The interstellar message in His Master’s Voice turns out to be an a-cultural code. Something between type III and IV. A combination of a production protocol and an ‘a-cultural’ description of a thing. In his memoir, Hogarth concludes that for humans it is impossible to create a-cultural codes, because we are defined by our cultures. All codes created by humans must contain traces of culture. And this cultural contamination can never be reduced to zero.

Channel, Contact, Context and Code — these four lenses are useful in guiding our analysis of CETI examples in science fiction, but they can be even more valuable when applied to the very starting point of CETI as a scientific endeavour — to the Drake Equation. As Douglas Vakoch observed in his opening remarks for the ‘Communicating Across the Cosmos’ workshop at the SETI Institute, the earlier terms of the Equation are already well explored, while the later ones still require a lot of exploration. To better understand what the fc term involves, I suggest considering it as a composite of four sub-terms discussed above: Channel, Contact, Context and Code.

I discuss this expansion on fc in more detail in my dissertation, Lingua Extraterrestris. The full text is available here.