Communicating Across the Cosmos – part 2

This is Part 2 of our report from the Communicating Across the Cosmos workshop on interstellar message composition held at the SETI Institute in Mountain View, California, November 10–11th, 2014. You can read Part 1 here.

Douglas Vakoch, who leads SETI’s efforts in interstellar message composition, opened the workshop by setting an ambitious goal: we will ‘grapple with the challenges of creating messages that could be understandable by an independently evolved civilisation living around a distant star’. To address this problem comprehensively we had a very wide spectrum of earthly fields of study and practice represented by workshop participants. Together with my colleague speakers we covered the domains of: anthropology, archaeology, history, linguistics, semiotics, psychology, philosophy, artificial intelligence, engineering, mathematics, chemistry, astronomy, journalism, art, and design.

Since the formulation of the Drake Equation in 1961 there has been a lot of progress in CETI endeavours, but some aspects of it have fallen short. Today, our equipment is a trillion times better and more sensitive than fifty years ago, whereas our message designs have improved only slightly. Also the Drake Equation, which has guided most of the modern work in CETI, still contains factors that need to be better understood. While the earlier terms of the Equation are rather well defined and today we are even confident to place a number on the rate of star formation (R), number of planetary systems (fp), or the number of planets that can support life as we know it (ne), little progress has been made in exploring the later terms of the Equation — the longevity of civilisations (L), the number of planets that are home to intelligent forms of life (fi), or the number of those that develop abilities to communicate signs of their existence (fc). 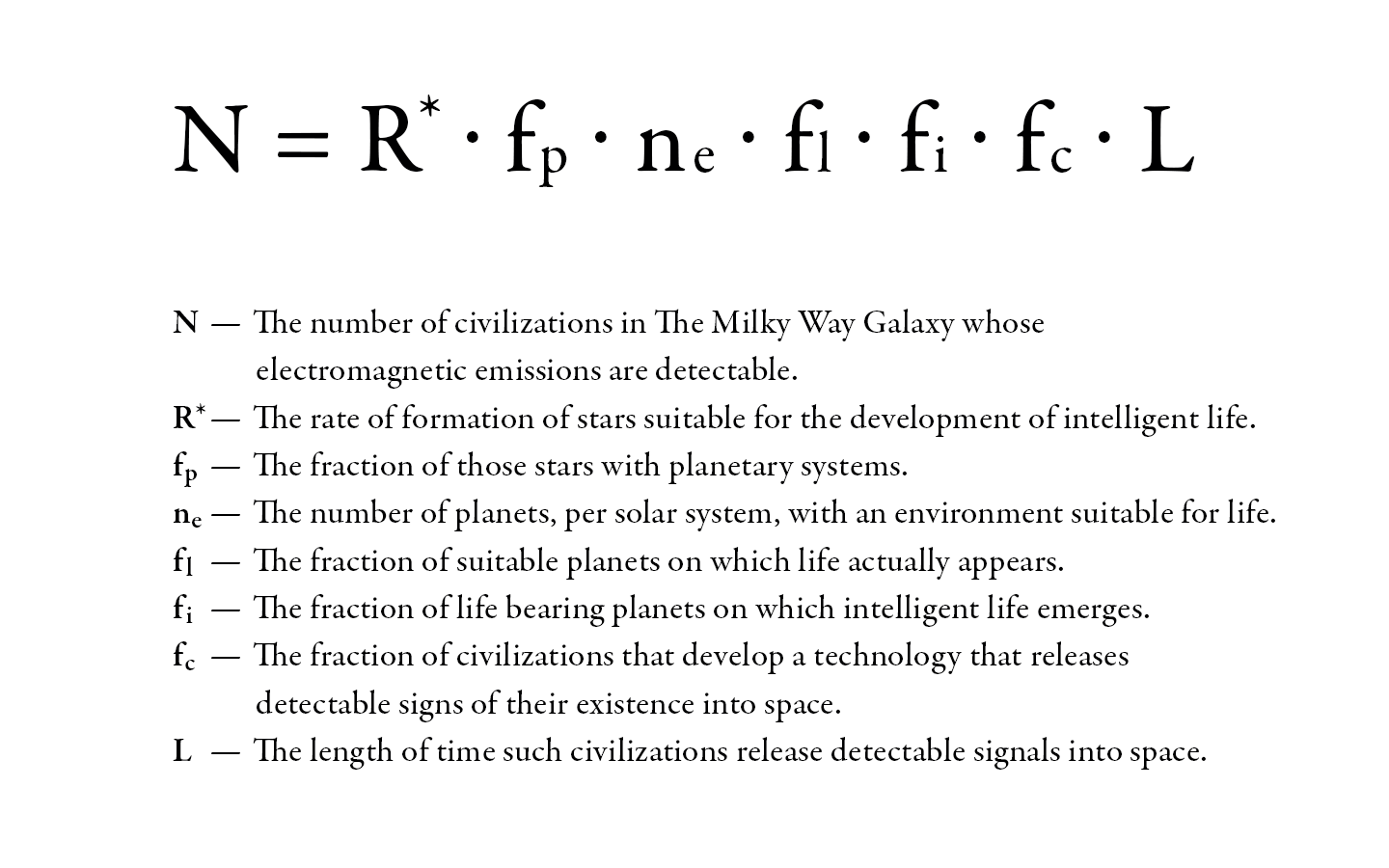 Therefore, the main focus of our ‘Communicating Across the Cosmos’ workshop was to explore the fc term of the Drake Equation in its broader cultural dimensions and requirements.

During the two days of the workshop we heard 16 presentations, each discussing the possibility of communicating with an extraterrestrial civilisation from a different perspective.

Psychologist Albert Harrison emphasised cosmic timeframes for interstellar communication. If we ever receive a reply to our message sent to a planet hundreds of light years away from Earth, it might be difficult to understand it even if they respond in English. This is because our own culture will change over a few centuries and future generations might not comprehend the meaning or point of our conversation any more. Thus, communicating across space is also inevitably communicating across time. Harrison explored time capsules to see how messages can be exchanged between generations. Interestingly, the most frequent reason time capsules fail is because people simply forget about them!

Cultural anthropologist Klara Anna Capova warned about projecting various human biases on interstellar communication. Our messages thus far were either politically charged (the Soviet ‘MIR, LENIN, SSSR’ message), heavily biased by the Western culture (in its representation of humans, the Pioneer plaque — below — disregards pregnant women, overweight populations, matriarchal societies or people of different ages), or simply embarrassing. Capova observed that when imagining the others we actually ‘make’ the others, and to do that we use ourselves as a model, because we know only one instance of intelligent civilisation in the universe — humans. 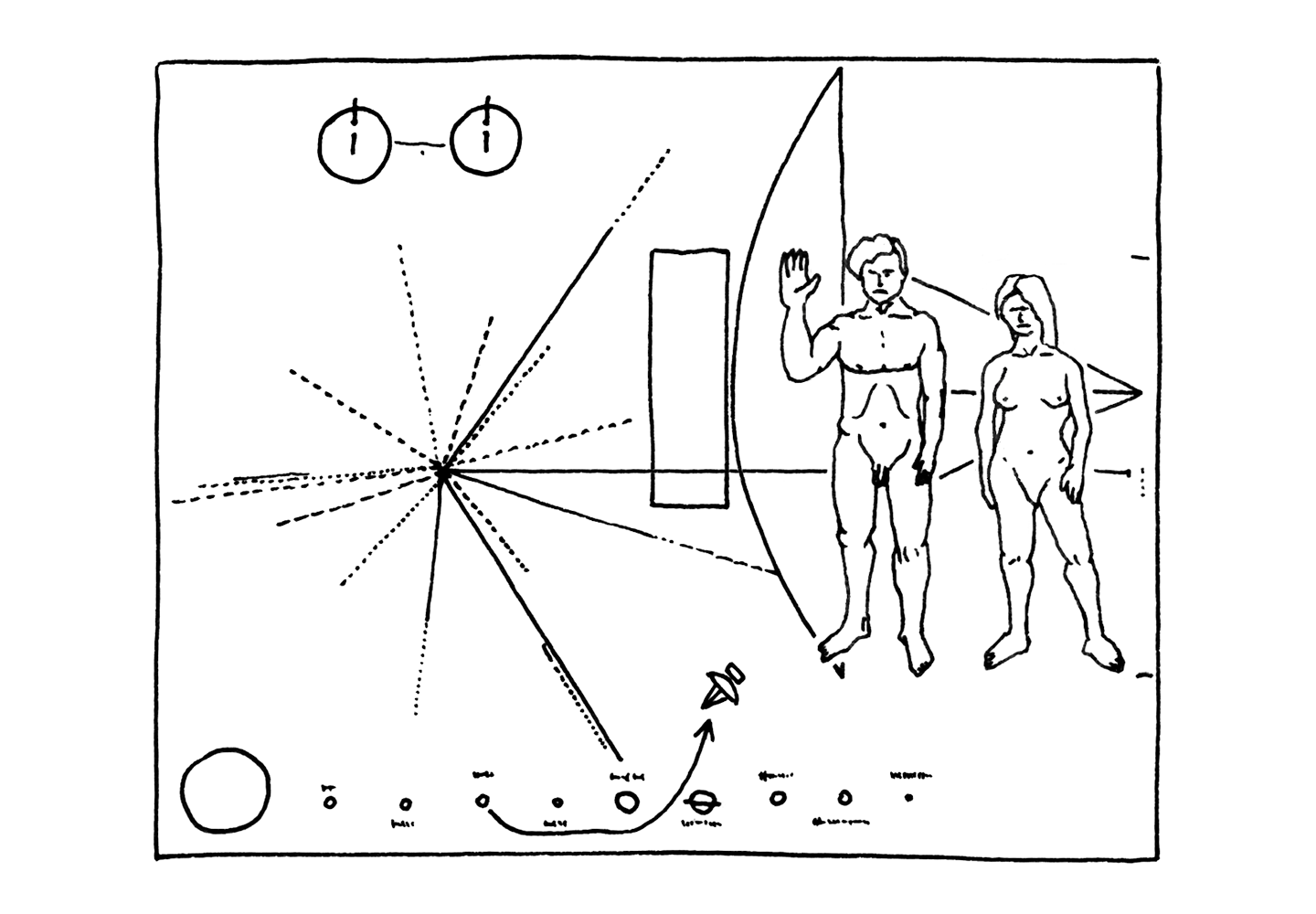 SETI senior astronomer Seth Shostak reminded everyone that Earth became a source of observable radio emissions a long time ago. So if we are worried about being tracked down by a hostile alien race, we should stop using all radio and forever. Otherwise, we may consider two practical options for interstellar messages. The first is to send simple pings. Pings can be transmitted non-stop and cover the entire sky, but lack more elaborate content than a mere indication of Earth’s presence and position. Another option is to send whole libraries of knowledge that humanity possesses with no discrimination between different types of content. This approach could be used for targeted transmissions. In his conclusion, Shostak dismissed sending another ‘greetings card’ and provocatively recommended to send everything.

Paul Wason, whose background is in archaeology, expanded on Marshall McLuhan’s ‘medium is the message’ when discussing the three levels on which archaeologists consider how ancient monuments communicate to us across time. The first level is subtext — what we can infer about the monument’s authors without knowing what they were trying to say. The second level is message — assumptions about what they had in mind or what they wanted to say when building the monument. The third level is medium — the physical form of the monument that can provide information about its creators without access to their thought. This led Wason to suggest that we need some kind of a Rosetta stone for communication with extraterrestrials. Consequently, he also posed the question of whether there is anything on Earth that all humans would understand, regardless of culture, language or context?

Artificial intelligence scientist Kim Binsted dismissed all communication strategies based on natural, formal, or visual languages — they cannot work because they all require some amount of shared knowledge and we do not know what this shared knowledge with extraterrestrials might be. Binsted described a Venn diagram that she did not know how to draw but which should include things that we know, things that they know, as well as shared knowledge that we could use to construct a pidgin language. Binsted echoed Wason in a call to construct a Rosetta stone, but also wondered, whether it could talk about anything else except physics, which is most likely the only knowledge that we might share with extraterrestrials.

Artist Carrie Paterson was quick to respond to Binsted’s call by arguing that we need new channels for multi-sensorial communication in order to be able to express much more than what a technical binary communication allows for. Paterson envisaged that messages and experiences could be sent using light or chemistry, and emitting such chemical signals could communicate our understanding of the physical universe to extraterrestrial beings with whom we share the chemical cosmos. Might chemistry be that shared knowledge that we could use as a Rosetta stone for interstellar communication?

In my own presentation delivered at the workshop I tried to expand on the fc factor of the Drake Equation by hijacking terrestrial models of communication and looking for inspiration in factual and fictional instances of CETI. I also presented a few ideas that we discussed at Science Practice before taking them to California. I will outline them in detail in the upcoming post, the final one in this ‘Communicating Across the Cosmos’ series.