Unmanned Aerial Vehicles (UAVs) - more commonly known as drones - have rapidly become the go-to gadget for hobbyists and professionals alike. They are regularly used for photography and filming applications, to deliver supplies to remote locations, and even by emergency services in search and rescue operations. But so far, they haven’t been welcome in cities.

The Flying High Challenge, a collaboration between innovation foundation Nesta and Innovate UK, aims to change that. The Good Problems team at Science Practice has been supporting the project by exploring problems that urban drones could solve and the barriers that need to be overcome before drones can be safely and usefully introduced to city skies.

To solve a problem, first you have to choose a problem. There are a wide range of barriers to introducing drones to cities, ranging from concerns around safety and functionality to restrictions imposed by the law. Through design-led research, we searched for and analysed these barriers to work out which problems the Flying High Challenge should focus on.

First up, there are clear technical difficulties in using drones to perform some tasks. For example, if police or fire departments need to use a drone in an emergency, it’s not very helpful if it can’t fly because of a little wind or rain. Some drones have sensors so advanced they can see through walls, yet they’re being held back by battery technology which limits the hardware they can carry and how long they can fly for. And Amazon wants to bring you your delivery in ten minutes flat? Great. Amazon drops your delivery from 400 feet onto the M25? Less great.

However, we can’t think about these drones in isolation: they’ll need a lot of new infrastructure, and if they’re going to be sharing the same airspace, they’ll have to learn to talk to each other. Cities will need to build recharging stations, maintenance hubs, and loading bays to help drones do their jobs. Drones criss-crossing the skies will need an air traffic control system to plan flight paths and stop them crashing into one another, as well as top-end security to prevent them being hacked or brought down.

There are legal barriers too: current regulations make it almost impossible for councils and businesses to operate drones in urban areas, since they can’t be flown near buildings or crowds (unless they have special permission, like when the London Fire Brigade used a drone to assess the damage following the Grenfell tower fire). In particular, drones can’t be flown autonomously, and have to fly within the visual line of sight of the pilot, which presents real issues for large-scale commercial applications.

To guide the decision-making of city authorities applying to the Flying High Challenge, we first produced an Introductory Pack which summarised our research in an accessible way. Its aim was to help bring cities up to speed with cutting-edge drone technology and help them decide which applications would be most appropriate and useful for their needs.

There turned out to be a lot of interest: whether they want to use them to deliver organs between hospitals, fight fires, or bring your packages to your door, cities across the UK want to be the first to bring drone technology into the urban environment.

Based on interest areas identified by cities and through our own research, we then shortlisted 13 priority use cases, each of which would offer significant economic and social benefits to citizens if implemented in UK cities. These use cases fall into five categories:

We distilled our research on each of these drone applications into digestible one-page summaries. Their aim was to help cities get a clearer picture of which use cases they might be interested in and establish what needs to be done before those applications can become a reality. 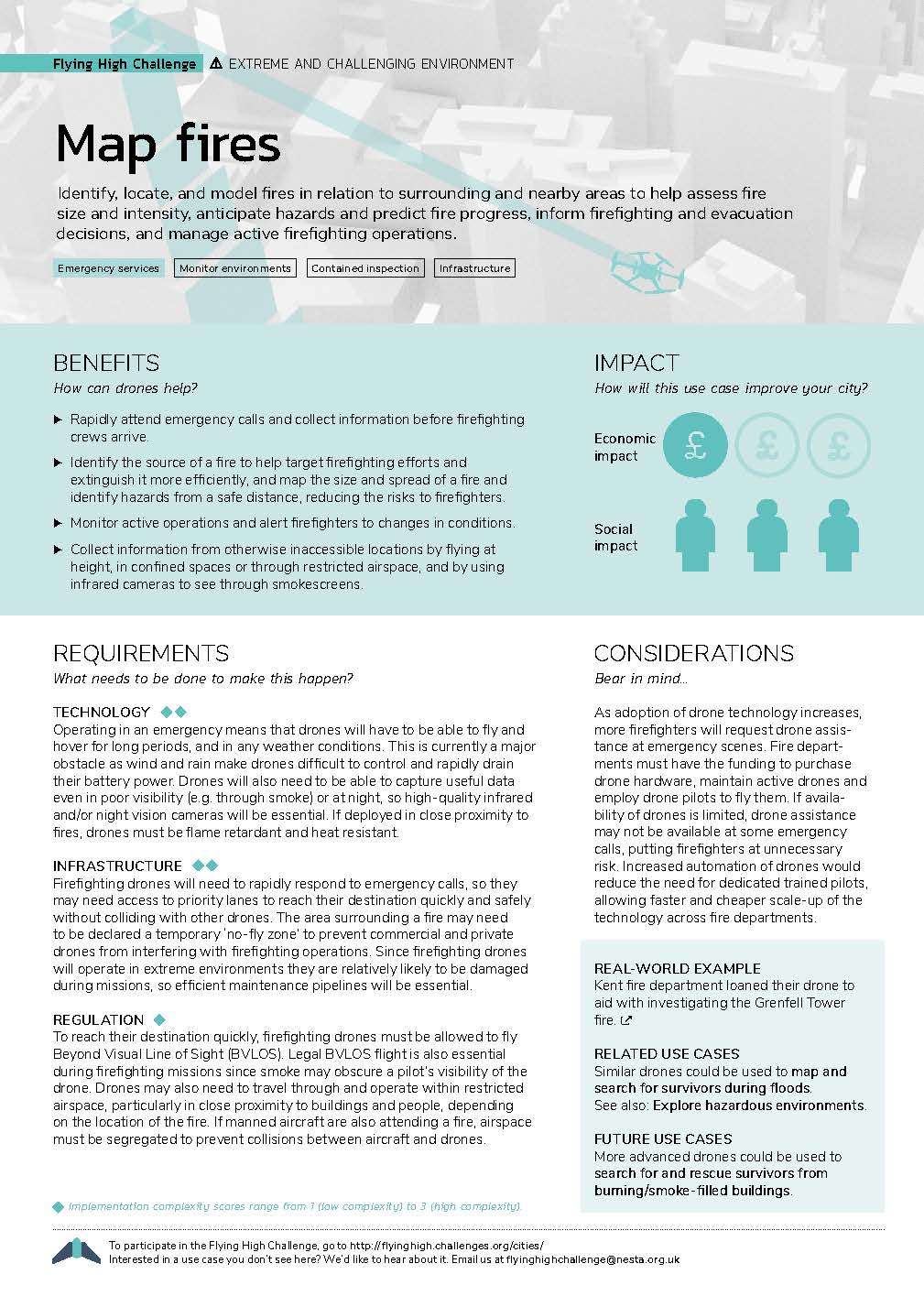 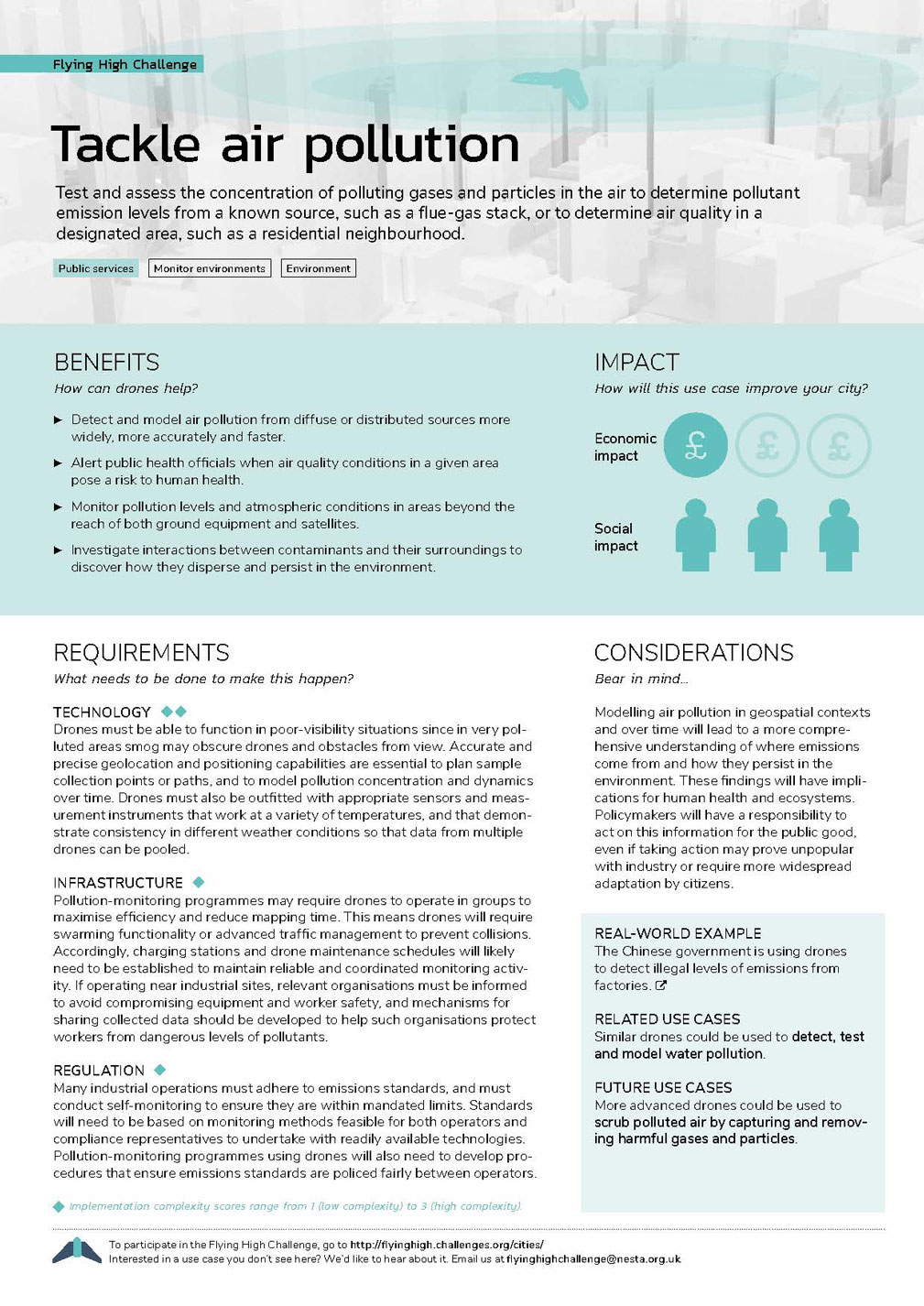 Two examples (left - mapping fires; right - monitoring air pollution) of the one-page summaries we produced for each of the 13 shortlisted use cases. See all use case briefs here.

Last week, the judging panel reviewed applications from cities across the UK and selected five cities to go forwards into the Flying High Challenge. Congratulations to Bradford, London, Preston, Southampton, and the West Midlands! Working together with Nesta, we will now explore each of the finalists’ visions in detail and help them identify specific use cases where drones could add value to their cities.