Speaking of Challenges and Innovation

The first thing we do when we start working on a project that covers a topic new to us is understand and assimilate the vocabulary and its different nuances. This introduction to a problem area can be a smooth one where key terminology and concepts are clearly defined, or it can be a bumpier ride. In these cases, it becomes part of our task to make sense of conflicting definitions and propose a consensus in order to advance dialogue.

In all honesty, none of the problem areas we have worked on were really smooth rides. While key concepts may have clear definitions, the context of our work is to encourage new thinking around problems. This often means encouraging a new language or vocabulary. A perfect example of this is our work around gender-based violence interventions.

In 2016 we worked together with the Humanitarian Innovation Fund (HIF) to help them design a number of innovation challenges. The aim of these challenges was to encourage solutions to some of the most pressing problems faced during humanitarian emergencies. One of these problems was Gender-based violence (GBV). 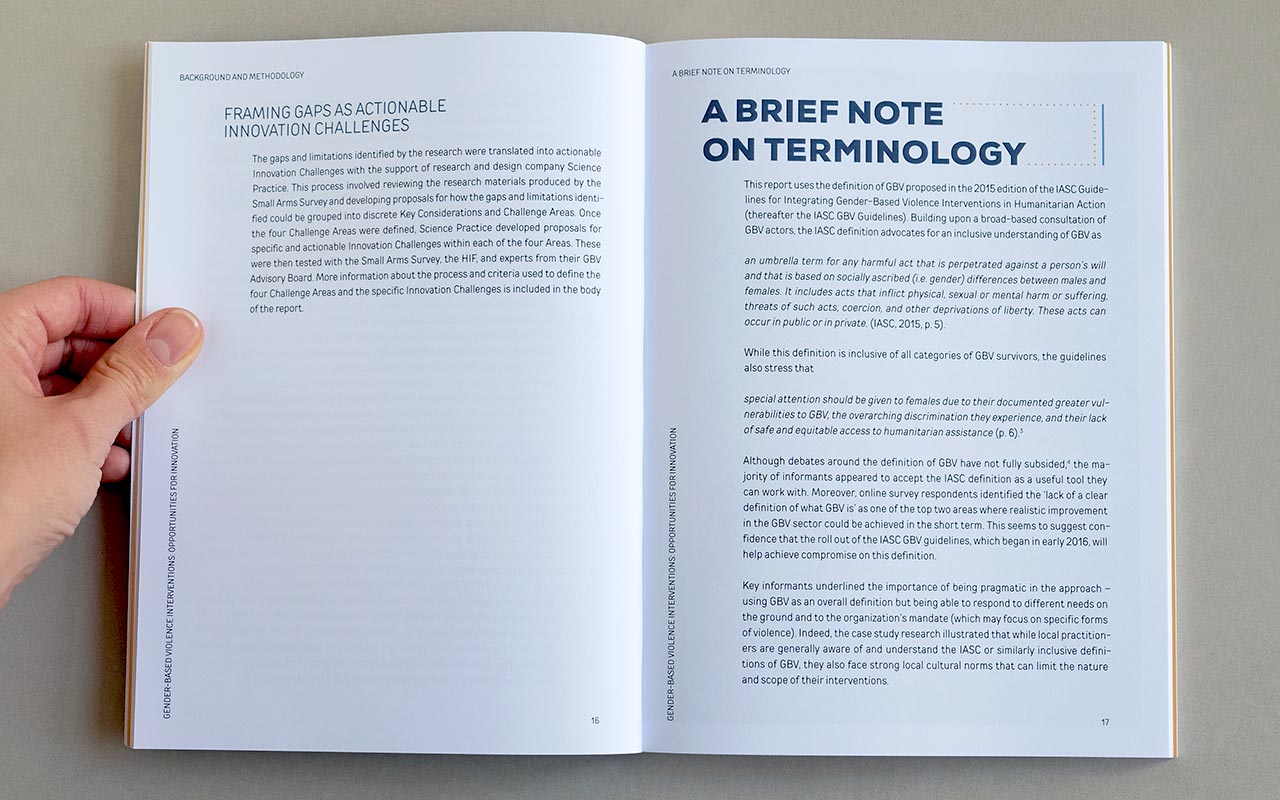 Forward note on terminology in the GBV Gap Analysis Report. We helped the HIF edit the report and Poważne studio helped design it. Read more about the project on our GBV Challenges page.

Most relevant in this case, IASC GBV Guidelines define GBV as “an umbrella term for any harmful act that is perpetrated against a person’s will and that is based on socially ascribed (i.e. gender) differences between males and females.” This definition is purposefully open to be inclusive of all categories of GBV survivors including men, boys, and the LGBTI community. Still, the guidelines stress that females should be given special consideration due to their documented greater vulnerability to GBV, especially in a humanitarian context.

Despite this emphasis, the change in perspective to adopt a more inclusive definition of GBV has generated tensions. Advocates for GBV as a female-centric issue argue that they have fought hard to get people and funders to pay attention to the topic within the context of humanitarian emergencies. Their concern is that now that the topic is gaining increasing attention, broadening the focus of GBV to include men or the LGBTI community would lead to a dilution of this message, and most significantly, a dilution of the funding allocated to the cause.

The lack of consensus on the definition of GBV had two consequences:

This problem was often flagged up by the research partners on the project, the Small Arms Survey. Doing research on the ground, they noticed that the lack of a common definition for GBV led to disagreements and used up valuable resources.

We weren’t in a position to provide an answer to the debate, but it became obvious that focusing on language on its own wasn’t going to lead to any progress. So we made a decision to move the conversation a step forward.

We acknowledged the different perspectives and decided to adhere to the broad definition proposed by IASC GBV Guidelines. As the role of the challenges we were designing was to open up problems in the GBV humanitarian emergency sector to a wider group of people and skills, this definition felt appropriate and timely. It also set the tone for the challenges as it implied an inclusive way of approaching the problem, one that required a new and open language. This decision allowed us to move beyond the stalemate and refocus the conversation on concrete barriers that are holding back progress.

Innovation in a GBV Context

But innovation is not about gadgets or high-tech solutions, it’s about adding value. Innovation is about creating something new – whether it’s a product, service, or approach – that adds value and leads to an improvement of a current situation.

It was this definition and idea that the HIF were keen to communicate through the challenges. Their goal was to not only reestablish the meaning of ‘innovation’, but also create a place for it in the space of humanitarian emergencies.

Our contribution to this process was to make sure the innovation challenges we were designing were targeting real and significant problems and would support the development of genuine and valuable solutions. While our role was to offer a new perspective on core problems and engage a broader audience of problem-solvers, we wanted to make sure that we were presenting a balanced view of the complexities entailed by each challenge and avoided oversimplifications. 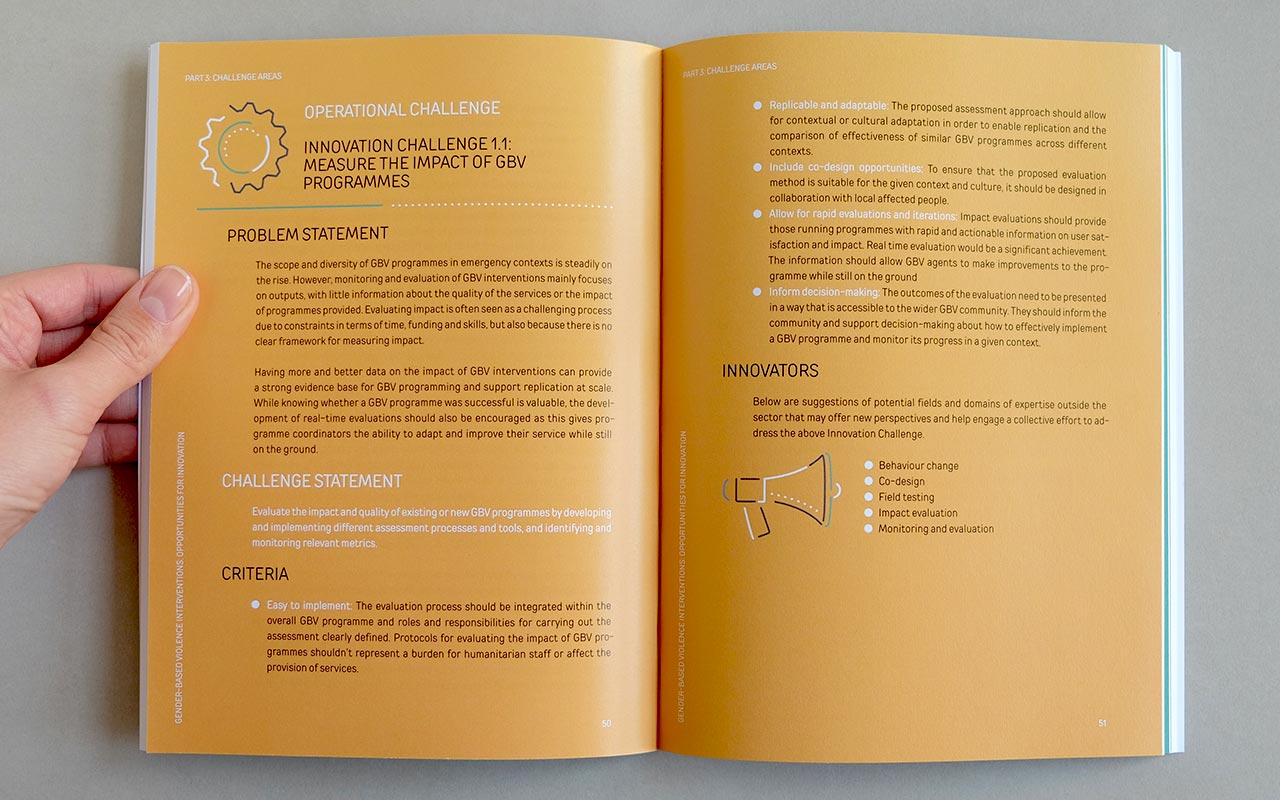 One other important aspect that we became aware of was that the ‘novelty’ implied by ‘innovation’ is context dependent. Having worked mainly on designing challenges where solutions were non-existent because of current technological limitations, we were used to ‘novel’ as meaning ‘new to the world’. However, for problems faced in the humanitarian sector, solutions often exist but they are not suitable for a space with limited resources. ‘Novelty’ here can mean creating completely new solutions, but it can also mean adapting existing solutions to a humanitarian context and be just as valuable.

It was through this lens that we designed the innovation challenges. While most of the problems identified were not necessarily new or unknown to GBV practitioners, what was novel about them was the perspective from which they were presented, the clarity with which they set priorities for action, and the different audiences they were targeted at.

Defining the terms we use when working on a new problem area will always be a priority for us. What we’ve learned from this project is that, sometimes, definitions are not readily available but need to be considered and constructed as part of the innovation process. In these cases, the ambition goes beyond that of designing innovation challenges and becomes that of creating a language that can support a new way of thinking and collaborating around problems.