BioDesign team member Simon recently joined around 150 participants at the Wellcome Trust BioData Hackathon. Focused on finding novel ways to use biological data to improve healthcare, teams had 2 days to design, develop and present their solutions. We were thrilled to be a part of the winning team for the Open Targets challenge to identify drugs with the potential to be repurposed.

The Wellcome Trust’s Genome Campus is always an enjoyable place to visit. This time I was there for the BioData Hackathon, alongside around 150 participants with backgrounds in statistics, bioinformatics, genomics, medicine, design, entrepreneurship and more. We’d all come together to come up with new ways to use biological data to improve health outcomes.

Although tempted by all of the challenges, I chose the challenge hosted by Open Targets - “How can we predict opportunities to repurpose drugs to treat unmet patient need?” as the intention was to not only come up with novel data analysis methods, but also to consider who might use the idea and in what context.

The focus of this challenge was all about the potential for existing drugs to be used as treatments for new symptoms and diseases. As is widely documented, the process of developing new drugs is both incredibly expensive, and very likely to fail. Drugs that are safe and effective are a scarce resource.

I quickly joined up with a fantastic team (Elodie, Ken, Joni, Rebecca and Robert,) with a variety of skills in bioinformatics, statistics, R and Python. Robert acted as a great project manager - making sure people knew what their jobs were, and that we were pulling together for one aim.

Who needs to repurpose drugs?

My first job was to understand the possible uses for a tool that could help identify existing drugs with the potential to be repurposed. Mentors for each of the challenges were available to provide guidance. Andrew Hercules, UX designer at Open Targets proved a great help, sharing his own insights from previous research on the possible uses for a drug reposing tool.

We also took inspiration from the opening talks, in particular, Gemma Chandratillake’s talk on the importance of improving diagnoses and therapies for rare disease.

Dr Gemma Chandratillake, trustee of the @camraredisease, reminds the attendees of the importance of keeping patient impact focused. #BioDataHack pic.twitter.com/l3oKO3FkT6

After discussing a few different angles, we decided to pursue the idea of developing a tool that would help clinical researchers to identify possible treatments for patients with unusual sets of symptoms. These could be for research projects, or possibly to help assist prescriptions (although this would require significant validation).

The idea behind the tool was to separate diseases into their constituent symptoms, and then matching those symptoms to drugs known to treat them in any context. By searching for a collection of symptoms, you could then find a list of drugs that have been used to treat at least one of the symptoms. The better the match of a drug to the symptoms input, the higher the score it would be given.

To test the algorithm could work the team used example data provided by the Open Targets team including drug, phenotype and target information. By the end of the first day, (with a particular shout out to Joni), we had working code. Although not perfect, there was evidence that the approach could work, as a number of existing repurposed drugs were identified as high scorers. Of course this approach also pulled out drugs specifically targeted at these symptoms too. Finding a way to differentiate these is definitely something that would be a high priority for any further development.

In the meantime I had got to work on a simple mockup for a possible UI. We imagined it as a search engine that would allow input of either a disease, or a set of symptoms. This would then return a list of drugs that have been recorded as treating some of those symptoms, and so could potentially be repurposed.

We decided to try and simplify this as much as possible. The scores were represented as different ‘buckets’, (from 1 to 5 stars) to give an indication of how strong a match was. Basic visualisations were also included to summarise some of the key information about the results. These included the top drug and target matches, as well as indications of how much each symptom contributed to the search results, and the phases of development of the drugs included. Indicating the development phase of a drug is important as drugs that have already been approved are the lowest hanging fruit for repurposing. Each visualisation would also be interactive, allowing filtering on the different properties.

From this point we focused on developing a good pitch - summarising the problem, our approach in the backend and a click-through of the prototype UI.

Four other excellent teams had also joined the challenge, and pitched their ideas to a team of judges. Each concept took a different perspective, including an idea to draw inspiration from Netflix’s personalised suggestion algorithm and a working tool using graph and machine learning technologies.

A very big thank you to the 20+ hackers working on our #biodatahack challenge: our ⭐️⭐️⭐️⭐️⭐️prize goes to Team 2.0 for its star system #UI, Repurposr. Well done! W/ @sciencepractice. pic.twitter.com/IYPFDZkZ0g

The hackathon was drawn to a close with winners announced for each challenge. We were incredibly flattered to find out that our team had won our challenge, amongst some very strong teams. The aim is for the idea to now be carried forward, to validate the algorithmic approach as well as to better understand possible contexts of use, and user needs. We hope that this can be the seed for a new tool helping to find treatments for people with rare disease. 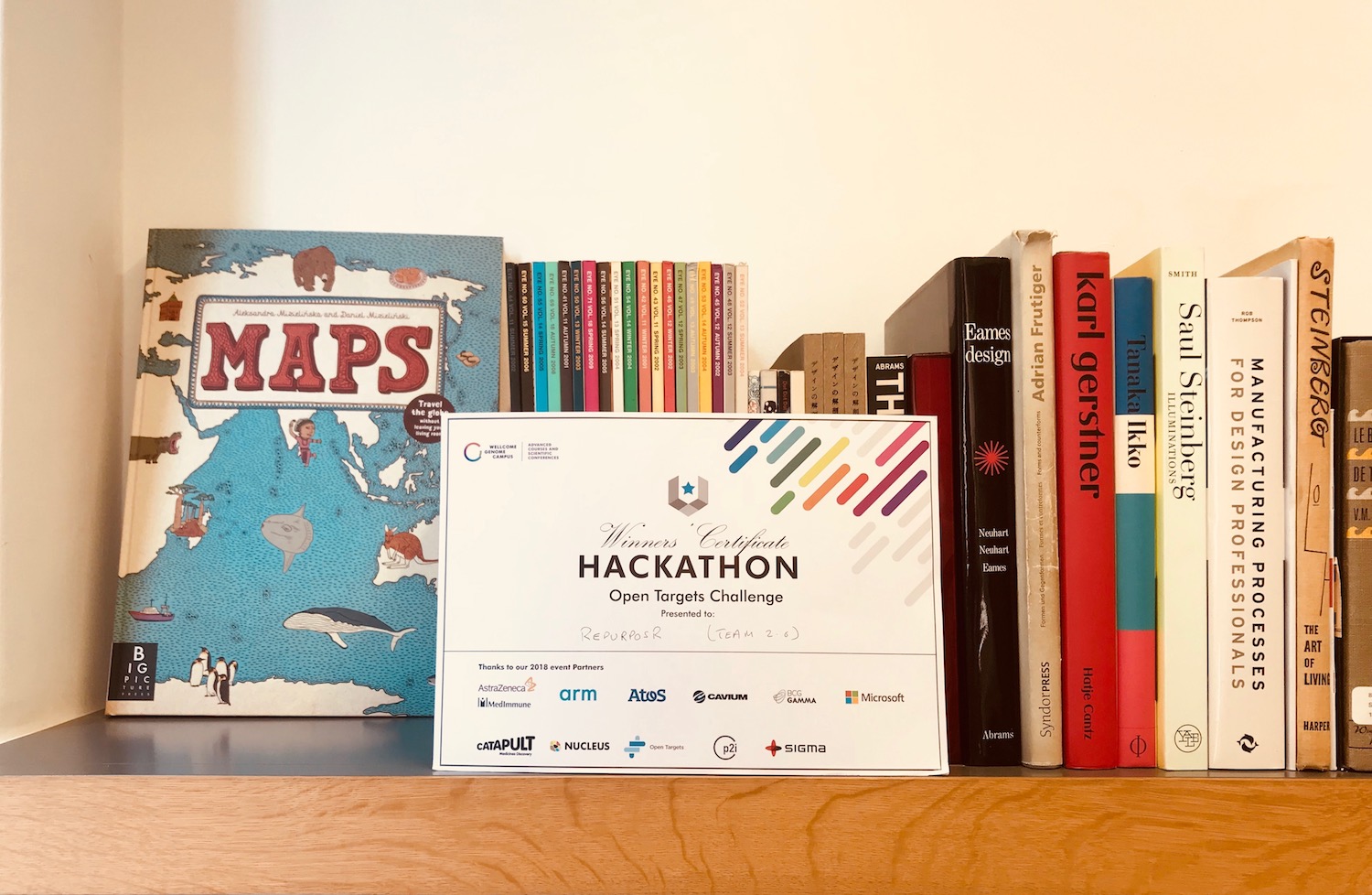